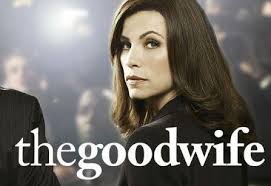 {spoiler alert}  For those of you who watch The Good Wife, you were probably eager to see some questions answered from the eventful finale last season.  You probably didn’t expect that the writers would throw more curve balls at you instead.  Well, I didn’t.  Not that I’m complaining, because the ensemble of this show keeps it fresh and interesting and acts it out so believably.

Last night, I was curious to find out if Alicia would agree to run for State’s Attorney and whether Diane would be accepted as a new equal partner in Florick/Agos.  Well, all that got sidetracked when Cary got arrested for drug trafficking.  He was treated pretty badly by the police and we got to see how inefficient and awful the police/prison system can be.  Cary wasn’t even able to call anyone for hours.  Once everyone realized where he was, they also realized that this was a police tactic to get at their drug dealing client, Lemond Bishop.  This created more panic because Alicia scrambled to tell the charming yet deadly Bishop that Cary will not turn on him and they have it ‘handled’.  Meanwhile Bishop’s guy in prison was cutting Cary with a knife as some sort of test of loyalty. “Guard, guard” he barely called out and then had to say he hurt himself accidentally.  Bishop apparently accepted Cary as loyal when an ‘independent businessman’ came to give Alicia $1.3 million dollars to use for bail.  Things still didn’t go smoothly since Alicia was removed as Cary’s counsel and the bail origin is in question.

Now, on Diane’s front, she agreed to represent Cary despite fearing that her current clients may not like the drug link.  David Lee and Canning are both suspicious that Diane is going to join Florick/Agos and are planning to use Cary’s arrest to spook all her clients.  They certainly don’t want to lose $38 million dollars of revenue.

Kalinda was back in the fold too as she rushed to help Cary.  Her former ‘girlfriend’ from the FBI is back too and things are getting interesting.  Somehow this all seems connected.

In Peter’s office, Eli has been plotting and planning already to get Alicia to run for State’s attorney.  Meanwhile, he’s also trying to keep Peter and his reputation in check by making sure an intern was wearing panties.  All very amusing, as is everything Eli does.  This time we also were entertained by his bold and amusing daughter who says she’d be great her dad’s line of work.

There were so many amusing and disturbing things in this premiere.  I’m sure Season 6 will not disappoint and obviously The Good Wife is still going strong.  What were your favorite scenes?

I'm a stay-at-home/sometimes working mom who has lots of opinions on Entertainment, Books, Parenting and Life in general! My thoughts stem from my experiences as a former career professional, mom, wife, and as a wacky, wonderful, woman! Friends have told me for years to share my thoughts publicly about the latest movies and TV shows so I finally am but I have lots of other thoughts to share so now I ramble here...
View all posts by Reena →
This entry was posted in Entertainment, Television and tagged Alan Cumming, CBS, Chris Noth, Julianna Margulies, Premiere, The Good Wife, TV. Bookmark the permalink.