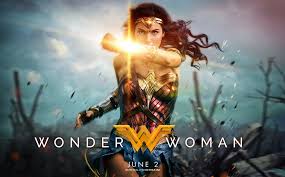 This past weekend my family went to see the long-awaited Wonder Woman movie and we were not disappointed.  We are a family of comic/sci-fi/superhero buffs so we were all excited and not happy that life interfered and made us wait until Sunday to watch it.  I remember watching the Wonder Woman TV show as a child and playing her with my friends.  I was and still am amazed by Lynda Carter so I had my doubts about Gal Gadot.  I think she’s beautiful but I couldn’t imagine her in this role from what I’d seen of her in Fast and Furious. Luckily, I changed my mind after her cameo in Batman v Superman.  She did a great job and I was impressed at how she portrayed the strength and innocence of the character.

I know there was a lot of excitement over the movie because it was nice for all the young girls out there to have a hero.  However, it was nice for any gender I believe.  My boys loved the movie and didn’t think about whether the hero was a man or woman.  They just saw the strength and humor and cool action scenes.  They know enough about DC Comics to know that Wonder Woman can fight alongside Batman and Superman with no problem.

For me, it was a thrill to watch since she has been my hero from my earliest childhood memories.  She was strong, smart, fair, and gorgeous.  It was great that the movie and the actors didn’t ruin those feelings for me and others.

As for how appropriate this was for younger kids.  It was definitely a PG-13 movie.  If your kids are a few years younger but have been exposed to other action movies with violence and some gore then I think it would be fine.  However, I would not take a very young child or one who is sensitive to the violence.  There is also a partial nude scene of a man.  There is some adult conversation about sex that may go over a younger kid’s head or may be awkward to watch depending on your child.  Also keep in mind that it is set during WWI so there are scenes of wounded soldiers in pain.

I think this was a very good movie and was impressed with the chemistry between Gal Gadot and Chris Pine.  It had well-developed characters and a good story line.  I think it would appeal to any gender and parents and kids alike.  Hope you get to watch.  Enjoy!

I'm a stay-at-home/sometimes working mom who has lots of opinions on Entertainment, Books, Parenting and Life in general! My thoughts stem from my experiences as a former career professional, mom, wife, and as a wacky, wonderful, woman! Friends have told me for years to share my thoughts publicly about the latest movies and TV shows so I finally am but I have lots of other thoughts to share so now I ramble here...
View all posts by Reena →
This entry was posted in Entertainment, Fantasy, Movies, Parenting, Uncategorized and tagged chris pine, Entertainment, gal gadot, good for boys, Kid-friendly, movies, Ok for kids, superhero, wonder woman. Bookmark the permalink.