Things I Should Do But Refuse To… 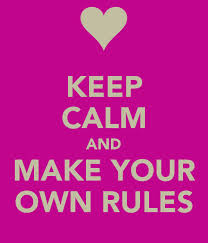 There are so many tips and guidelines for living healthier, looking better and being more successful in life but sometimes doing the wrong things makes us happier.  Living on the dark side in some little ways can give pleasure so I don’t care if it’s not right or differs from the norm.  This is my bad-ass list…

I should give up chocolate and brownies…but I refuse.  They give me a happy high and it’s safer than drugs.

I should more ambitious even if it means long stressful work hours…but I refuse.  I can live with less money or fame if I see my family more.

I should not shower with very hot water since it will dry my skin…but I refuse.  It melts away the aches and pains.

I should pat dry my wet skin after a shower instead of rubbing with a towel…but I refuse.  It just feels good and dries off better.

I should keep up with the Jones’, Patels, or Singhs…but I refuse.  The comparisons never end so it’s better to be content.

I should stop my kids from watching TV in the weekdays…but I refuse.  They do their homework, music and, get physical activity so what’s the big deal?

I should drink coffee or tea like everyone else I know…but I refuse.  Why get hooked on something I don’t care for just because it’s a social norm?

I should go on a strict diet or cleanse…but I refuse.  Maybe it helps, maybe not, but mostly I’ve seen people yo-yo on these things and I’d rather just eat more sensibly.

I should not read books from the kids or teens section since I’m an adult…but I refuse.  There are just so many great books that are more fun like Percy Jackson, Harry Potter, or Twilight.

I should regularly watch sports with my boys…but I refuse.  I don’t mind enjoying an occasional game but I’d rather spend hours on MY shows.

I should not waste money on watching so many movies in the theater…but I refuse.  Yes it gets pricey (so skip the popcorn) but it’s my favorite form of entertainment and it transports me to cool worlds.

I should not make Ramen noodles for my kids since it’s not a ‘healthy meal’…but I refuse.  It’s quickie food that they like it once in a while and if I put a bunch of veggies in there, I don’t feel guilty!

I should not go shopping in my sweats after working out at the gym…but I refuse.  Oh well, I might see someone I know and I won’t look glamorous but it saves me time since the gym in close to the shops.

I should save my money instead of going on trips and exploring…but I refuse.  As long as I’m not going into debt doing it, I think taking my kids on trips is an important learning tool and bonding experience.

I should not watch so much television…but I refuse.  I’m still a very productive person so why should anyone care how I unwind or enjoy myself?

So these are a few of the things on my rebel list.  They may be ‘bad’ for me or just go against the norms of society but I think they’re okay.  So don’t judge!  Just go break a few tiny rules of your own as long as they don’t hurt anyone.

I'm a stay-at-home/sometimes working mom who has lots of opinions on Entertainment, Books, Parenting and Life in general! My thoughts stem from my experiences as a former career professional, mom, wife, and as a wacky, wonderful, woman! Friends have told me for years to share my thoughts publicly about the latest movies and TV shows so I finally am but I have lots of other thoughts to share so now I ramble here...
View all posts by Reena →
This entry was posted in Inspiration, Life and tagged be happy, break rules, rebel list. Bookmark the permalink.

1 Response to Things I Should Do But Refuse To…