The Theory of Everything- Mom Review 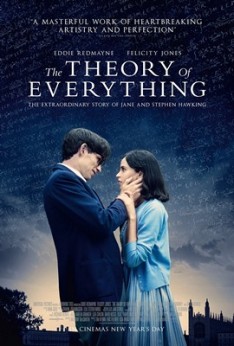 The movie, The Theory of Everything, leaves you quite in awe of Stephen Hawking if you weren’t already.  It is a story about his struggles with his career interests and his struggles with his disease and how the illness pushes him to succeed.  It is also a story of his marriage to Jane and all that they go through together as she cares for him through his decline.

Eddie Redmayne does an amazing job portraying the character of Stephen Hawking.  It is a tough role physically to show the symptoms of ALS while still maintaining the amazing mind and personality of Hawking.  Felicity Jones also does a great portrayal of his wife, Jane.  She shows strength of character and sensitivity while also making us feel her pain and struggles as a mother and wife in this difficult situation.

It is touching as a story of a relationship but also inspiring to watch one of the greatest minds fight to get his theories across.  I really enjoyed this movie.  My older son, who is 12, wanted to watch this movie with us but we didn’t take him and told him maybe on DVD if we deem it is appropriate.  I think it is fine for him to watch because there isn’t an issue of bad language, gore or sexual scenarios.  However, I don’t think he would really enjoy it.  It is less about the scientific discoveries and more about his relationship.  It is inspiring to see him defy the 2 year life expectancy he was given with his diagnosis but I don’t think my son would’ve appreciated the movie.  I think he might have gotten bored since he would have wanted to hear more about space.  For adults, however, it is not boring at all!

I'm a stay-at-home/sometimes working mom who has lots of opinions on Entertainment, Books, Parenting and Life in general! My thoughts stem from my experiences as a former career professional, mom, wife, and as a wacky, wonderful, woman! Friends have told me for years to share my thoughts publicly about the latest movies and TV shows so I finally am but I have lots of other thoughts to share so now I ramble here...
View all posts by Reena →
This entry was posted in Entertainment, Movies, Parenting and tagged eddie redmayne, felicity jones, Good for kids, movie, Stephen Hawking, Theory of Everything. Bookmark the permalink.