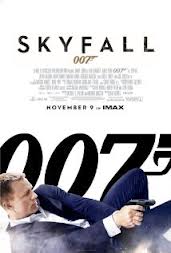 The latest Bond installment has been doing very well in the box office, and rightly so.  It was a very good movie.  The last two Bond movies starring Daniel Craig had a different style.  They showed a more angry, serious James Bond but Skyfall brings us back to more of the original 007 feel.  It was full of great action scenes and his old Aston Martin (the car received the biggest reaction from the audience).  There was a bit of lightness and the charm of our favorite spy.  There were also two beautiful Bond girls, Naomie Harris and Berenice Marlohe with whom he enjoyed entertaining banter and some steamy scenes.

Javier Bardem did an amazing job as the villain.  He was awful and sadistic in so many ways yet telling his back story made you sympathize with him as well.  He had a bit of humor in his style and was a great match against James Bond as he plotted revenge against M.  Judi Dench performed well as usual trying to be unemotional and focused on the job despite emotionally trying situations.  The addition of Ralph Fiennes as Gareth Mallory of MI6 was a good choice as well.  He’s another complex character that you get to know more as the movie progresses.

Overall, it was worth going to the theater to watch and would please most Bond fans out there.  It was also entertaining enough as a stand-alone movie for those who aren’t up to speed on the other Bond films.  My boys who are 8 and 10 were very interested in watching it since the trailers they had seen on TV looked ‘cool and action-packed’.  We did not take them to watch it since Bond movies seem made for a more mature audience.  Having now watched it, I can say it was the right decision and I’m glad we didn’t give in to the boys.  There is more sex, violence, and mature dialogue than many of the similarly rated superhero movies that they’ve seen.  I would say it is more appropriate for older teens and up.

So, check out Skyfall if you get a chance.  Lots of eye candy and action.  More insight into the back-story of main characters.  All in all a good flick and a good theme song by Adele too!

I'm a stay-at-home/sometimes working mom who has lots of opinions on Entertainment, Books, Parenting and Life in general! My thoughts stem from my experiences as a former career professional, mom, wife, and as a wacky, wonderful, woman! Friends have told me for years to share my thoughts publicly about the latest movies and TV shows so I finally am but I have lots of other thoughts to share so now I ramble here...
View all posts by Reena →
This entry was posted in Entertainment, Movies and tagged Aston Martin, Daniel Craig, Jame Bond, James Bond in film, Javier Bardem, Naomie Harris, Ralph Fiennes, Skyfall. Bookmark the permalink.